We are an inclusive, progressive and diverse Christian community, dedicated to loving others as Christ has loved us. We welcome all who wish to join us.

We extend a warm welcome to all visitors and newcomers! While you’re visiting, please complete a visitor card (at the end of each pew) and place it in the offering plate. We invite everyone to stay after the service for coffee hour in the parish hall.

Let us know if you have a prayer request for yourself or someone else, and we’ll include it in our Sunday bulletin. For indefinite requests, please submit a new request each week. If you have a pastoral care emergency, please call our office or email us. 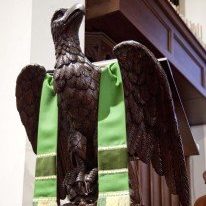 The season of Epiphany is the time we celebrate the manifestation of Christ to the peoples of the earth. The winter solstice was kept on Jan. 6 at some places during the first centuries of the Christian Era. In opposition to pagan festivals, Christians chose this day to celebrate the various manifestations, or “epiphanies,” of Jesus’ divinity. These showings of his divinity included his birth, the coming of the Magi, his baptism, and the Wedding at Cana where he miraculously changed water into wine. The day was called “The Feast of Lights.” Celebration of the Son of God replaced celebration of the sun. Baptisms were done, and a season of preparation was instituted. It was later called Advent.

St. John's Mission Committee has designated the 1st Sunday of the month as non-perishable food item donation week, and the 3rd Sunday as personal hygiene donation week, to help address needs of...

END_OF_DOCUMENT_TOKEN_TO_BE_REPLACED

Our Adult Forum concludes on Dec. 22 as we continue to discuss "Light of the World: A Beginners Guide to Advent," by Dr. Amy-Jill Levine. Join us  @ 9:15 in the parish hall. The book can be...

END_OF_DOCUMENT_TOKEN_TO_BE_REPLACED

Volunteer to help at Loaves and Fishes

Regular volunteer help is urgently needed at Loaves & Fishes of Tompkins County for two or more hours every Monday or Friday from 9 am - 2:30 pm. This is a great opportunity for seniors or...