Beginning Sunday, Feb. 16 @ 2pm, we will offer a weekly class for all who wish to be confirmed, be received officially into the Episcopal Church, make an adult affirmation of their baptism, or otherwise brush up on their Episcopalian knowledge. The class will be appropriate for all ages. Topics below; contact  Mtr. Megan for more details.

February 16: Introductions/ Stuff We Believe: Creed, Part 1 – How we got the Nicene Creed, how it changed over the years, what it means for us for us to say it.

February 23: Stuff We Believe: Creed, Part 2 – What is in the Creed, what’s not in there, what it all means

March 1: Bible 101 –  How the Bible was written (more or less), how the Bible has been read through the ages, how the Episcopal Church reads the Bible.

March 8: Bible 101 continued – What’s in the Bible, and how not to be intimidated by it.

March 15: Book of Common Prayer – What that prayer book is all about: how we got it and what we do with it.

March 22: Church History – Early Church Excitement, where Christianity came from, how our traditions and concepts developed

March 29: Church History: Anglican Awesomeness , emergence of the Anglican Communion and our particular corner of the globe

April 19: Who’s Who, and Who Decides What – How decisions get made in the Episcopal Church—locally, nationally, and globally.

St. John’s has a podcast now!

We’re excited to announce the launch of our podcast, “Weekly Sermons from St. John’s Episcopal Church”! Now you can listen to weekly sermons from us any time you like! Subscribe now on Apple Podcasts or on ANY podcast outlet or mobile app you use to listen to podcasts. If you like, please like, subscribe, and leave us a review on Apple Podcasts!

Don’t have a podcast app? No problem! If you listen primarily on your PC, go to http://podcast.stjohnsithaca.org/ to get every recording.

Anthems in the 10:30 service this season will include works by Vaughan Williams, Ippolito-Ivanov, Vittoria, Mendelssohn and more, with favorite service responses by Mathias and Schubert. Our parish choir welcomes new singers in the new year! The group spans diverse ages, backgrounds and experience levels, and joins together weekly in service and song. Please speak with the organist after worship or contact her through the church office for more information and lots of encouragement!

As we enter this new decade, you are invited to listen to some recent anthem offerings (embedded below), read some recent  stewardship  reflections from members of St. John’s Church, visit our Youtube channel, or join us on Sunday mornings!

St. John’s Mission Committee has designated the 1st Sunday of the month as non-perishable food item donation week, and the 3rd Sunday as personal hygiene donation week, to help address needs of the  Ithaca Kitchen Cupboard and the Catholic Charities of Tompkins Tioga (CCTT) Samaritan Center, the Your assistance is needed and appreciated!

If you have questions or concerns contact any of the Mission Team members, Florianna Blanton, Marcia Baum, John Jackson, Margaret Johnson and Cora Yao.

The Ithaca Kitchen Cupboard provides 3 days of emergency food to local families in need daily, every week. Over 7,000 people yearly are fed. St. John’s needs two volunteers to join our team, to help distribute food from 1–3 on Fridays, every third week. Generally, volunteers serve once every 2–3 months. If you can assist, please use the form at “Contact Us“; enter “Kitchen Cupboard” in the “Subject” field. For more information, contact the church office at 273-6532.

Our Adult Forum concludes on Dec. 22 as we continue to discuss “Light of the World: A Beginners Guide to Advent,” by Dr. Amy-Jill Levine. Join us  @ 9:15 in the parish hall. The book can be ordered from your favorite local bookstore, or purchased in paperback or Kindle format from Amazon.

Volunteer to help at Loaves and Fishes

Regular volunteer help is urgently needed at Loaves & Fishes of Tompkins County for two or more hours every Monday or Friday from 9 am – 2:30 pm.

This is a great opportunity for seniors or recently retired people to engage in our community in a meaningful and very helpful way or for people wishing to gain experience in the hospitality industry.

If interested, please simply come to our back kitchen door at the St. John’s Church on the corner of Buffalo and N.Cayuga Streets or call 272-5457 or email info@loaves.org

Mother Megan’s first Sunday with us was Palm Sunday, 2018! (See Clergy Corner for more information.) On Sept. 24th the entire parish celebrated her new ministry at St. John’s Church in a Festive Choral Eucharist with Bishop DeDe, area clergy, friends, family and guests.  (The full installation service can be seen on Facebook, and the program for the liturgy is here.) We give thanks to God for this joyous outcome and officially welcome The Rev. Megan Castellan as our new Rector. 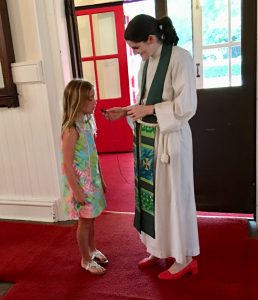 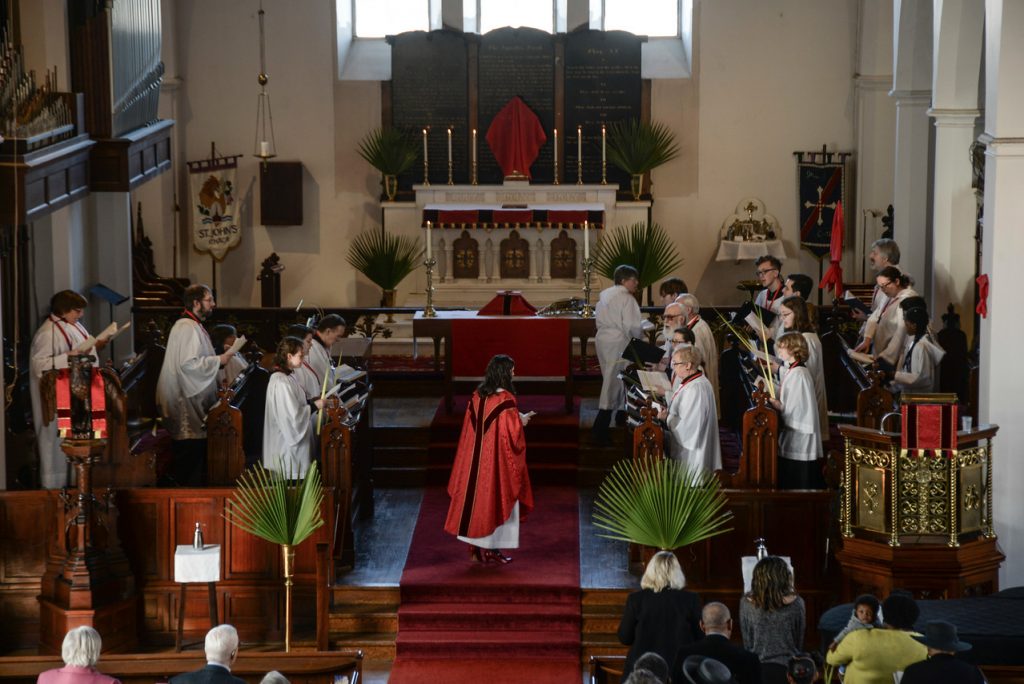 Our “Lift Every Voice & Sing” (LEVAS) hymnals were dedicated Oct. 1st. Which hymns would you like included in upcoming services? Click below for a table of contents, and look for your favorites!  Send your suggestions to office@stjohnsithaca.org

Full Table of Contents (with some music) – Here

The LEVAS hymnal is used widely by Episcopal congregations across the country. It contains 280 musical pieces from the African American, Folk, Evangelical, and Gospel traditions compiled under the supervision of the Office of Black Ministries of the Episcopal Church.

This new cultural resource supplements our Hymnal 1982 and enriches the ongoing worship life of St. John’s Episcopal Church, broadening the musical experience for all members, friends and visitors.

Fr. Margrave’s prayer over the hymnals: O Lord, before whose throne trumpets sound, and saints and angels sing the songs of Moses and the Lamb: Accept these Lift Every Voice and Sing Hymnals for the worship of your temple, that with the voice of music, we may proclaim your praise and tell it abroad; through Jesus Christ our Lord. Amen. 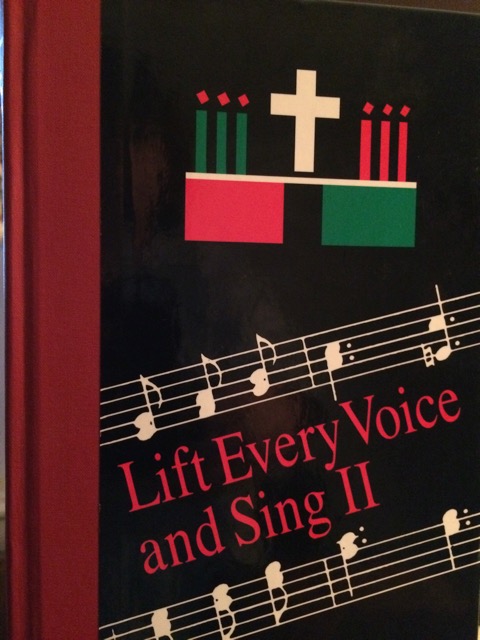 With Deep Thankfulness from the Mission Committee

We hope that this year brings only goodness to you and your loved ones! We just wrapped up another wonderful season of love and compassion through our Christmas Giving Tree.

On Thursday December 22 at around 11:45 am we finished sorting the gifts and gift cards that you kindly purchased for our six sponsored families. We managed to fit everything into one of our vehicles (which looked fuller than Santa’s sleigh) and proceeded to drop the goodies at GIAC and at the house of a local teacher, our contact for the two Burmese families on our list.

We enthusiastically received many bear hugs on your behalf, and were proud to describe how one by one the tags on the tree returned properly attached to their corresponding gift request, beautifully wrapped, or with warmly written notes and cards. We brought abundant smiles and hope to many local children and adults this year!

We know that we are making a difference but seldom are we given the chance to learn firsthand what the presents really mean. This time around, however, we received a unique gift in return: a short story that our contact teacher told us. That same morning, EHK, the 9 year old boy in her class, and in our family #5, broke down in tears and told her how since the death of his father (late in the Spring of 2017) everything had become much harder for them. He related how hard it is for the family to get food and clothing, and just about everything else. When, in addition to the gifts, I presented her with an envelope containing 0 in TOPS gift cards just for his family, we both knew what it would mean for them to receive such an unexpected windfall. The Mission Committee will discuss other practical ways in which we might continue a relationship with this family throughout the year, and will reach out to you in case you want to become a part of this effort.

This year, due to your generosity in bringing more than we asked for, we can only provide you with an approximation of what the families received (for example, in several instances, instead of a TOPS card we received 0; instead of one article of clothing for a child, we received several; instead of one toy for a particular child we received one for every child in the family).

We handed out between about 0 to 0 per family in TOPS cards (for a total of about 15). We collected toys for toddlers, doll houses, stuffed animals, Lego, Science & jewelry making kits, board games, puzzles; warm clothing ranging in size from 18 months to men’s medium for the teenage boys –in addition to boxes of cookies and chocolates for everyone.

And yet, there is an even sweeter ending to the whole thing! 2 days before the gifts were due, one of us was talking at work about how, in spite of our best efforts, we were not able to sponsor a 7th family that we had in the past, but couldn’t include this year (grandparents raising two of their grandchildren and now also great-grandchildren). This resulted in a last minute large donation that, coupled with some funds from our budget, allowed us to include these grandparents in our gift giving to provide them with 0 in TOPS gift cards and an item of clothing and a toy for the younger children.

So, once again, THANK YOU falls short to properly acknowledge your effort. Seven families is a record for us, and we were only able to reach everyone because of your generosity.
May 2018 also bring you much joy and kindness from unexpected sources!