The Episcopal Peace Fellowship focused mainly on three issues in 2019:  prison reform, peace and justice in Israel/Palestine, and nuclear disarmament.  We also offered prayers for Prayers of the People for each month focused on a topic of concern.  These prayers concerned topics such as humane treatment for prisoners, climate change, food security, and the challenges for families.

In March, we sponsored presentations at St John’s and at Cornell by Ira Helfand, an activist who belongs to Physicians for Social Responsibility, about the dangers of nuclear weapons and the “Back from the Brink” proposal.  Approximately forty people attended the talk at St. John’s and fifteen at Cornell.  St. John’s vestry has endorsed the “Back from the Brink” proposal, as well as the Ithaca Town Council.  Frank Baldwin has also written Bishop Dede about the proposal but has not received a response. 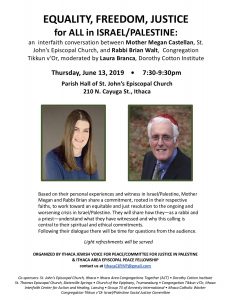 In June, the EPF chapter and Jewish Voices for Peace co-sponsored a panel discussion by Mother Megan Castellan and Rabbi Brian Walt of Tikkun v’Or about justice for Palestine.  The event was held in the Fellowship Hall of St. John’s to a capacity crowd.

We have continued to be concerned about prisoner justice and the use of solitary confinement.  One of our members attended a statewide meeting about the issue.  We have continued to write letters to politicians about this issue.  We also participated with the local chapter of Amnesty International Human Rights Day letter signing on behalf of prisoners around the world. 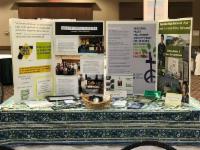 Finally, the prayer cards that were created by John Jackson a few years ago were made available and printable online by Michael Roman.